In the center of this mixed media project is the work of English photographer Eadweard Muybridge (1830-1904). He left very young England to go to America where he coped with the new field of photography.

On the occasion of a bet he started in 1872 his movement studies of humans and animals that interessed him throughout his life. He wanted to visually demonstrate that a galloping horse has at one moment all four legs in the air. Muybride is famous with his series of photographs and continuous shootings as one of the most important representatives of early chronophotography. He invented the photography series using a complex technical design for the 19th Century and created the conditions for the development of the film.

Almost forgotten, however, are the other events of his life. 1874 Muybridge murdered his wife‘s lover, Colonel Larkyns, after the discovery of their letter exchange. In the following trial he was acquitted because of „excusable crime“.

The Photographer was commissioned in 1982 by the Holland Festival and was premiered in the same year at the Royal Palace Amsterdam. In Germany it has not been staged until now. This may be due to the unique structure of this work: the theater , the visualization, the concert and dance are not simultaneously but successively inserted into the 3 acts.

Act I shows as a drama the events surrounding the crime of Muybridge and his subsequent acquittal.

Act II combines images with music and is taked the form of a concert for Violin and Ensemble.?

Act III brings in a furious dance finale, that belongs to the best works heard of Philip Glass, the characters of the first act - but this time as a dancer - back into the action.

Duration of the performance: 70'

"Three dancers-actors come alive entering the house through the audience, especially David Essing (Larkyns) who wanders the rows, repeating the murder scene with his fist, banging and crashing in slow motion. The body of Annapaola Leso (Flora) then tells about the torture of being caught between marriage and passion, with broken arms, and shoulders lower than hips. Finally, a husband, at first rigid and distant, Ross Martinson (Muybridge) conducts his partners into a trio combining sensual grace and acrobatic energy in which the portés change their relationship. At the end, a deserved ovation greets these three artists, the conductor Manuel Nawri as well as the KNM Berlin and the six choristers of Vocalconsort Berlin."
Anaclase, Laurent Bergnach, 27th of September 2014

"Particularly challenging are the three main roles, because they are not only acted, but also danced in a spectacular last part. Annapaola Leso, Ross Martinson and David Essing furiously stormed onto the prepared stage of the concert hall. The choreography of the Taiwanese Shang-Chi Sun took advantage of Muybridge's famous motion studies as inspiration for his characters. (...) This lively and compact 75 minutes Philharmonic evening ended with loud cheers for the involved performers."
Kölner Rundschau, Matthias Corvin, 16th of September 2014

"Nevertheless, this about 70 minutes long piece developed a considerable attraction - especially in the direction and choreography of the Taiwanese Shang-Chi Sun, which was performed as a guest production at the Kölner Philharmonie. Three excellent dancers (Annapaola Leso, Ross Martinson and David Essing), who were also performing as actors, were supported by six singers of the Vocal Consort Berlin and twelve musicians of the chamber ensemble Neue Musik Berlin under the direction of Manuel Nawri. (...) This was a very remarkable evening combining a fusion of cool precision and wild virtuosity, and was enthusiastically received by the audience. "
Kölner Stadt Anzeiger, 16th of September 2014

"Shang-Chi Sun has created an uncommon, form-fitting, clockwork-like choreography with repetition, which adds a sharpness to the music, whips it outright forward and drives out the warm embrace from Glass partition."
rbb info radio, Harald Asel, 7th of June 2014 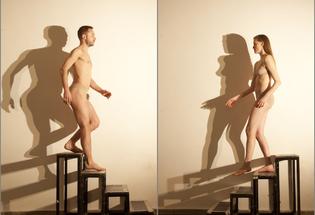